Light Up Your Health with Photobiomodulation (PBM) 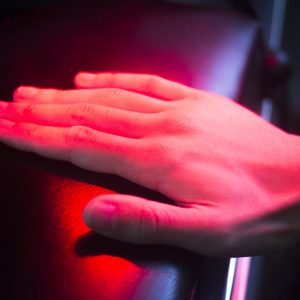 Exposure to light is an important part of creating brain-body wellness, as light exposure allows humans to set our circadian rhythm, the system that regulates when we sleep versus when we are alert.

When our bodies are exposed to natural daylight, we produce serotonin, the “feel-good brain chemical” that later breaks down into melatonin to allow us to fall and stay asleep (Asprey, 2017).

Photobiomodulation (PBM) refers to the use of light in the red or near-infrared (NIR) range, as defined by wavelengths measured in nanometers (a billionth of a meter) with therapeutic ranges identified as 600 to 700 nm and 780 to 1100 nm (Freitas de Freitas & Hamblin, 2016). Researchers at Harvard and other leading institutions gave their summary of the therapeutic aspects of photobiomodulation on the body achieved with little to no negative side-effects. Benefits include:

In his book, The Ultimate Guide to Red Light Therapy, Ari Whitten (2018) discusses the history and current broad applications of PBM:

“Indeed, this discovery of the power of red light to speed up healing and regeneration of human cells has now been confirmed by hundreds of studies. In the 1990s, even NASA started using it. They were initially using red-light LED technology for the purposes of growing plants during shuttle missions. But once it was discovered that these lights also affected human cells, NASA started testing and refining the technology with the idea to use it to help astronauts maintain muscle and bone mass, as well as to treat chronic wounds.

Since these early days, photobiomodulation (PBM) and low-level light/laser therapy (LLLT) have grown into entire fields of research, the body of scientific evidence has grown to several thousand studies over the last few decades, and these light treatment technologies have begun to work their way into the offices of doctors and health practitioners, and into the homes of thousands of people.

There have now been literally thousands of studies conducted on both animals and humans. Overall, red light has been repeatedly shown to have positive effects on cell function in animal and human studies an aide in improving a wide range of conditions, improving health in numerous ways. Red and near-infrared (NIR) light therapy devices have been FDA-approved for several purposes so far, including anti-aging, hair-loss reversal, acne treatment, pain relief, slow to heal wounds, fat loss, among other purposes. (Whitten, 2018)”

The mechanisms through which photobiomodulation achieves these therapeutic benefits to the brain-body system appear to happen via two key mechanisms:
(a) increased mitochondrial energy production, and
(b) hormesis, a temporary low-dose metabolic stress which builds up the cells’ antioxidant and anti-inflammatory defense systems (Whitten, 2018).

Other researchers suggest that an additional effect of increased blood flow and nitrous oxide (NO) production also plays a key role in improving cell functioning (Hamblin, 2016).

Mitochondria are organelles often referred to as the “powerhouses of the cell” given that they facilitate the energy production processes in the human body via the Krebs cycle to produce adenosine triphosphate (ATP) (Asprey, 2017).

For my research study completed as part of my dissertation on brain-body wellness, I applied a pulsed-light system called Neurocare Systems to the skull as well as other parts of the body depending on how the participant was presenting (GI issues, pain, etc.). I now attend training calls as part of the Neurocare Systems team to learn more about how their protocols can assist with many conditions.  Feel free to reach out to me if you would like more information.

Here is a photo of one of my participants getting the full head/face treatment using the Neurocare Systems pads: 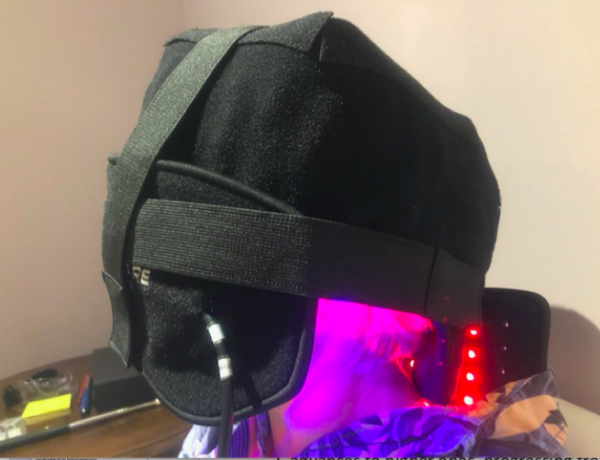 An InLight medical study completed in 2018 enrolled 12 military veterans who had experienced traumatic brain injury (TBI) prior to eighteen months in enrolling in the study (Hipskind et al., 2018).

The reason that the researchers enrolled only study participants that had incurred their brain injury in excess of 18 months prior to the study is they wanted to measure the effect of photobiomodulation separate from the normal brain recovery process that occurs after a TBI in the first eighteen months following an injury.

The veterans received pulsed transcranial photobiomodulation three times a week, with 20-minute sessions, over a period of six 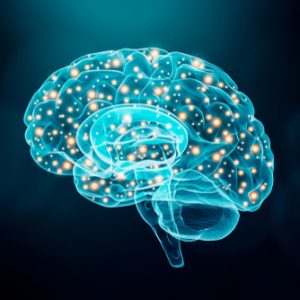 Another study looked at the effects of a single treatment (at two sites of the pre-frontal cortex for four minutes per site) for ten patients with major depression and anxiety as measured by the Hamilton Depression Rating Scale (Schiffer et al., 2009). At two weeks following the treatment, seven of the ten patients experienced a remission on the Hamilton Depression scale A (HAM-A; Schiffer et al., 2009).

In terms of applying transcranial photobiomodulation to a healthy population, a study in 2014 demonstrated that PBM improved performance of cognitive tasks related to the prefrontal cortex, and also improved mood, in the twenty participants versus the control group also consisting of twenty individuals (Barrett & Gonzalez-Lima 2013).

It is clear that there is great potential for brain-body healing and wellness via photobiomodulation for individuals experiencing recovery from injury as well as non-injured individuals seeking to improve performance.

Are you still reading? Great job!  Here is a 15 min video where I talk about video and take you to a few sites/products of interest: