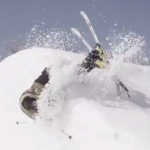 A day of skiing powder yesterday reminded me how uncoordinated I can still be on skis.  Mantra #5 from my book is Embrace the Yard Sale, otherwise known as Learn from Your Mistakes.

In that chapter, I go through some major success stories that were based on initial failure.  See the “game” below (Name That Loser). But first, you can watch this 43 second video where I explain what the heck I’m talking about as related to Embrace the Yard Sale:

With the new Star Wars movie coming out this week, I was floored to learn that when George Lucas first showed the first movie to friends, some said it was “the worst movie they’d ever seen”.  So hey, don’t get discouraged if things are not always going your way!

Think life is easy? Think all the folks who have been successful have just skipped their ways to the pots of gold? To put things in perspective, let’s play a game called Name That Loser. I will describe true, painful stories about failure and loss. You get to decide which story is about which protagonist. Are you ready?

This business leader failed out of college and then went on to co-own a failed business.

As a young boy, this intellectual powerhouse was told that he was “too stupid to learn anything.”

After this musical act’s first performance, the paraphrased feedback was: “You are not going anywhere.”

This public speaker had a panic attack in front of five million fans.

This award-winning Hollywood icon was told early in his career, “Why don’t you stop wasting people’s time and go out and become a dishwasher or something?”

This entertainment icon was told early on that she/he “was not right for [the screen].”

He’s a politician who flunked out of school not once, but twice.

This author was told that he/she was writing in genres that “do not sell.”

The correct answer in each case is C, but all these folks— As, Bs, and Cs—saw major failures and major success. Let’s learn a little more about their experiences.

According to business lore, Fred Smith wrote a paper about his overnight package-delivery concept (the world’s first such model) in business school and received a mere C from a doubtful professor. Steve Jobs dropped out of Oregon’s Reed College after only one semester. He also quit one of his first jobs to backpack around India.

In terms of intellectual powerhouses, Albert Einstein didn’t speak fluently until he was nine, causing teachers to think he was slow. He was also expelled from school for his rebellious nature. Charles Darwin certainly seemed to have daddy issues, as it is believed that his father told him he would amount to nothing more than a disgrace to his family and to himself.

In music, the Beatles were told after their first audition in 1962, “We don’t like [your] sound, and guitar music is on the way out.” Back in the 18th century, Beethoven was allegedly told by his music instructor that he was a hopeless composer.

The stakes are high in public speaking, but the threat of being thrown off a cliff is something few speakers experience. That is exactly what happened to Jesus when he went to speak in his hometown of Nazareth. Luke 4:28-29 describes a scene that would probably scare away most other public speakers for good: “All the people in the synagogue were furious when they heard this. They got up, drove him out of town, and took him to the brow of the hill on which the town was built, in order to throw him down the cliff.”

The world cringed in 1992 when Vice President Dan Quayle, leading a spelling bee for sixth-grade students at a New Jersey elementary school, corrected 12-year-old William Figueroa; the child spelled potato on the blackboard, and Quayle made the boy add an unnecessary “e” at the word’s end.

I was speechless when I learned that Walt Disney was fired from a Missouri newspaper for “not being creative enough.” And my jaw dropped when I learned that Steven Spielberg, the director of some of my favorite movies, was rejected from his top-choice college three times due to poor grades in high school.

Hollywood is tough. The story goes that Fred Astaire was told after his first screen test, “Can’t act. Can’t sing. Balding. Can dance a little.” There are no words to explain the obstacles Christopher Reeve had to overcome in his lifetime. After winning hearts in Superman, the avid equestrian was thrown from his horse in 1995 and became a quadriplegic. Despite the accident, before his death in 2004, he remained active and started the Christopher & Dana Reeve Foundation, which supports re- search to develop cures and treatments for paralysis patients.

James Carville’s personal mission statement is supposedly along the lines of, “No one will ever accuse [me] of taking [my- self] seriously.” Carville was the chief campaign strategist for Bill Clinton’s 1992 presidential campaign. You are probably familiar with the story of Abraham Lincoln; even so, it deserves mention in the arena of political failure and triumph. Born into poverty, Lincoln was faced with defeat throughout his life. He lost eight elections, twice failed in business, and suffered a nervous breakdown. We have the opportunity to recall not only his failures but his successes, every single time we look at a penny.

Jack Canfield, co-creator of the Chicken Soup for the Soul series, which has sold more than 500 million copies worldwide, was rejected by 144 publishers. I wonder if any of those naysayers wound up weeping into their soup bowls as they thought about the missed opportunity. J. K. Rowling, author of the Harry Potter series, was rejected by more than a dozen publishers and likely felt hopeless as she scraped by on waitress tips and public assistance. Maybe she was imagining her future success when she wrote Albus Dumbledore’s line: “Happiness can be found, even in the darkest of times, if one only remembers to turn on the light.”

Yoga can also teach you how to learn from your mistakes.  Read more here.