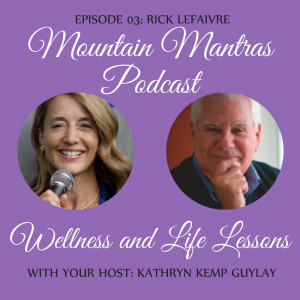 Episode 003 of the Mountain Mantras: Wellness and Life Lessons show features an interview between (my husband) Jeff Guylay and Dr. Rick LeFaivre PhD. Rick shares his 40 years of experience evaluating business opportunities to hone in on how we should be defining success in business today.  Jeff is a partner at Colonnade Advisors, LLC.  Colonnade helps entrepreneurs sell their businesses or raise capital to grow.

You can download a great summary of the (8) Mantras from a Venture Capitalist, including the four pillars used to evaluate a business opportunity as discussed in the interview here.

About Rick
Dr. Rick LeFaivre has 40 years of accomplishment as a computer scientist, professor, R&D executive, venture investor and board member working at leading universities, high-tech companies and venture capital firms. Before moving from Seattle to Sun Valley, Rick was a partner at OVP Venture Partners, where he started the firm’s clean energy practice.

Previously, Rick served as vice president of the Advanced Technology Group at Apple Computer; as Senior VP of R&D and Chief Technology Officer at Borland International; and held R&D leadership positions at Silicon Graphics, Sun Microsystems and Tektronix. He was a founding partner at IdeaEdge Ventures, a San Diego-based venture development organization, and a founding board member of the Software Patent Institute, which advises the government on issues related to software patentability, and CSNET, a precursor of the Internet.

Rick received his bachelors degree with honors in mathematics from the University of Missouri and his Ph.D. in computer sciences from the University of Wisconsin. He has published extensively in computer science literature, has served on a number of industry and academic advisory boards, and has testified before the Congress of the United States on matters of technology policy.

Contact Rick at: RLeFaivre@gmail.com
or via the Ketchum Innovation Center