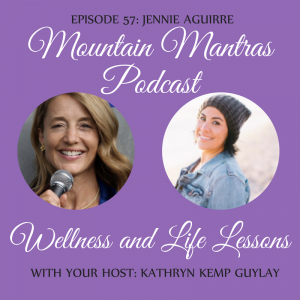 Today’s guest for the Mountain Mantras Podcast is Jennie Aguirre.  After working for 16 years in the medical field as a nurse and case manager, Jennie unexpectedly switched gears and became a stay-at-home mom. Convinced motherhood, especially single-motherhood, would never be a part of her plan, this was a surprising and life-changing role she was tossed into quite abruptly. Being someone who never does anything half-effort, Jennie committed herself to her new title of “mom” tenaciously. She went to all the classes, read all the books, and got all the t-shirts. What she found; however, was that none of it mattered. If this was going to be successful, she needed to dive deep into HERSELF.


More about Jennie:
Having grown beyond a traumatic and abusive childhood, several years in the sex industry, and countless attempts at figuring it all out, Jennie was no stranger to self-help, therapy, and the growth process. But this was a new level. As a devoted kundalini yoga practitioner and meditation enthusiast, her mindfulness practices became more important than ever. The goal became to fully embrace herself; to love and accept herself so completely that it would become her fundamental operating system. Throughout several years of inner-work (and what she calls “THE work”) she has discovered what it takes to achieve this place of abundance she so fondly refers to as her “place of ease and grace”.

“The work” turned into a passion to help others do the same for themselves. She now spends her time as a self-empowerment coach in Los Angeles. Jennie leads private sessions online for her clients and hosts fun and edgy in-person focus groups where nothing is ever taboo. She works with men and women of all backgrounds who are ready to harness their inner power, which exists in everyone, and live their fullest lives. She encourages her clients to step into that power through self-awareness, self-care, and ultimately self-love by providing a space for them to explore their individual truth without judgement. Jennie’s no nonsense approach is delivered with humor and love, and is sure to spark a flame in anyone she reaches. Jennie currently lives in Los Angeles with her precious son, Ben. She enjoys nature in all its forms, hiking, spinning, a good almond milk latte, and any opportunity to sit in the sun. She swears that one of the greatest healers available to us is music, and if you’re around her, expect it to be turned up!