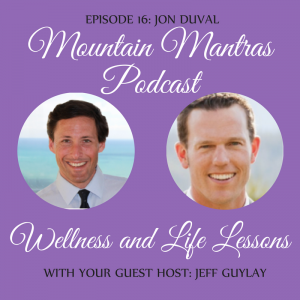 Episode 016 of the Mountain Mantras: Wellness and Life Lessons show features an interview between Jeff Guylay and Jon Duval.  Please read more about Jon below. Here are the six Mantras from their discussion that act as excellent take-aways from the interview:

1. In terms of gauging the potential success of an entrepreneur, passion is at least as important as the idea itself.
2. The world is becoming more mobile, so the options to merge entrepreneurial dreams with lifestyle goals (even if that means skiing and mountain biking) are becoming more plentiful.
3. Creativity is contagious, so being around other creative minds gives an entrepreneur an advantage.
4. Group environments also provide energy and momentum for entrepreneurs (more reasons to get out of the garage!)
5. Don’t try to be the master of all trades– get help!
6. If you are going to fail as an entrepreneur, it is better to fail early (and then pivot).

I want to thank Jon for being an endorser for my book, Mountain Mantras: Wellness and Life Lessons from the Slopes. Jon called the book “great advice for business leaders seeking the most from life.” 🙂

After college, Jon spent five years working and traveling around the world, from investment banking in London, teaching in Japan and coaching hockey, and even working as a bicycle messenger in New Zealand. Jon landed in Ketchum, ID in 2006.

Jon works as an on-the-ground advocate for local businesses and the infrastructure that supports economic development, including the creation of affordable housing and downtown infrastructure. Jon is one of the founders of the KIC, a hub for entrepreneurship that includes a business incubator and a robust mentorship program, leveraging local intellectual talent to help startups.

Jon is an entrepreneur himself. Through his career acting as an interface between local government and the business community, Jon has found that government leaders appreciate the opportunity to build consensus and solicit feedback in representing their constituents. Jon identified a lack of a purpose-built application designed to make this interaction quick, efficient and effective as both a source of information and feedback. Jon founded LocalVote, a web and mobile application that allows city leaders and communities to gauge public opinion through informal polling.