E048: Be Positive and Powerful with Olympians Kikkan Randall and Liz Stephen 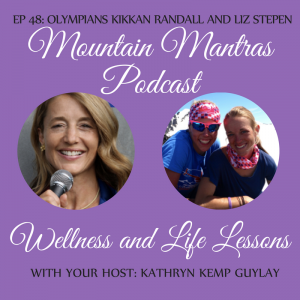 They tell some amazing stories that support the following three mantras:

In honor of Kikkan Randall and Jesse Higgins winning the GOLD in the 2018 Winter Olympics, I’m offering a copy of my book, Mountain Mantras: Wellness and Life Lessons from the Slopes (Kikkan wrote the Foreword!) for FREE.

We refer to this video in our recording.  I’m sure you’ll want to watch!

Watch Liz and Kikkan race at the 2013 World Championships at Val Di Fiemme in Italy.  The first video is of Liz Stevens placing 5th at world champs in the 10 km.  Her form is impeccable, quick, efficient and she is simply “getting it done”!  The second video is 9 minutes long of Kikkan and Jesse winning the team sprint at Worlds with highlights being Jesse’s broken pole and the huge margin they won by pure grit and determination!

The US Women are racing in black suits.

Here’s a cute video montage of photos including Kikkan with her son Breck, who was born not too long after I met her.  How exciting! 🙂

Kikkan Randall is one of the few athletes who can say she made her Olympic debut in her birthplace – born in Salt Lake City and a member of the 2002 Olympic Team in Salt Lake (although, admittedly, the races were at Soldier Hollow). A promising cross country runner while growing up in Alaska, she added “serious” cross country skiing as a counter-seasonal training vehicle…and then became a champion skier, too. She’s already got the best Olympic and World Cup results by an American woman.

Kikkan’s words to live by:  “Always give your best!”

Liz Stephen started her young career as an alpine skier at Vermont’s Burke Mountain Academy, but later found her calling on the cross country course. The U.S. Team can count their blessings on that decision, as Stephen has quickly become a key distance asset to the women’s side, competing on three World Championship teams and reaching her second Olympics in 2014.

Stephen’s Sochi push was an impressive one, earning the best U.S. finish in the 30k and bolstering the U.S. relay squad in the 4x5k relay. The Vermont native also recorded her highest individual result on the World Cup, snagging sixth in the Szklarska Poreba, Poland 10k classic. She also posted six more scoring results in the World Cup, bringing her career total to 22.

In 2013 Stephen was part of the fourth place World Championships 4×5 relay team and took fifth in the 10k freestyle at the same event. Just two years earlier, a young Stephen made her Olympic debut in Vancouver, and two years before that in 2008, she stood on the podium at the U23 World Championships with a bronze medal finish.

Stephen will spend her offseason in Park City training at the USSA Center of Excellence as she prepares for another stellar season in 2015.  Liz says: “It was another fun season on the World Cup, and being a member of my second Olympic Team was of course a highlight this year.  I will be training in Park City again this summer between training camps with the team and am looking forward to next season already.”

About Fast and Female:

Fast and Female was started in 2005 by Canadian Olympic gold medalist Chandra Crawford to empower girls to aspire to sports and a healthy lifestyle. Fast and Female events have been held on both coasts and in Canada, Norway, Sweden and Australia.

Statistically, girls are six times more likely to drop out of sports than boys, said Randall. Randall and her teammates are in Sun Valley to compete at the Super Tour Finals, which is bringing more than 200 of the top racers in America to compete for the national championships at Galena Saturday through Thursday.

“We want to spread the message: Do sports to be healthy. Come together and empower others,” said Randall. “We pair younger girls with fabulous role models—coaches and athletes and show them how much fun it is and give an inspirational chat. They get a personal connection with those they may have only seen on posters until now. And it gives meaning to what we do as athletes.”

Crawford, Randall, Jessie Diggins and other U.S. Ski Team members held a Fast and Female event in Sun Valley in 2011, and the girls who were there are still talking about it, said Sun Valley Nordic Ski Coach Kelley Sinnott.

“All the kids are so excited about this,” she added. “These are their heroes. They get to meet them, ski with them. It’s something that will empower them as they race their race, as they live life. Their message of empowering and inspiring young women through sport is so important and valuable.”

On Thursday young Nordic skiers from the Sun Valley Ski Education Foundation dolled up their faces with gold glitter, formed teams such as the “Green Giggly Gangster Gorilla Pigs” and came up with “Go Fast and Female” cheers for each team.

Ski team members and ambassadors like the SVSEF’s Mary Rose, dressed in colorful head bands, tights, capes and tutus, introduced them by way of their “power animals” that Randall said exemplify “the qualities we identify with.”

“My power animal is the toucan. I figure if I can, toucan,” said Ida Sargent, who competed at the 2014 Winter Olympics in Sochi.

Then the girls headed out onto the snow where they took part in fun games such as lunging at the finish line, to sharpen their skills.

Randall and Sargent showed one group, which included 10-year-old Svea Leidecker,  of Hailey, how to fall onto their entire body, using their core, to jump off at starting line.

One girl immediately fell on her face.

“That happened to Norway’s Petter Northug, one of the top skiers in the world, just the other day at the World Cup,” Randall assured her.

Randall challenged the girls to “put your poles in the snow as fast as you can” as they double poled at the start.

Ella Wolter, now 13, was eight when she attended the Fast and Female held five years ago.

“It was inspiring because I got to see the medal that one of the girls won at the Olympics,” she said. “And it’s fun getting to meet all these top racers.”

Randall told the girls that she hoped that they would make sports a part of their life: “All these positive things happen when you’re involved in sports….It gives you well-being, confidence and allows you to chase your dreams.”