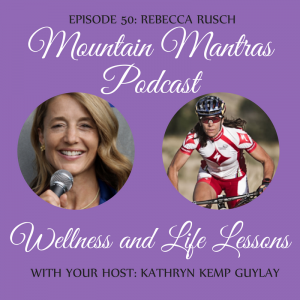 Episode 050 of the Mountain Mantras: Wellness and Life Lessons podcast features Rebecca Rusch, one of the great endurance athletes of our time.

Known today as the Queen of Pain for her perseverance as a relentlessly fast runner, paddler, and mountain bike racer, Rusch was a normal kid from Chicago who abandoned a predictable life for one of adventure. Her book Rusch to Glory: Adventure, Risk & Triumph on the Path Less Traveled, weaves her fascinating life’s story among the exotic locales and extreme conditions that forged an extraordinary athlete from ordinary roots.

Rusch has run the gauntlet of endurance sports over her career as a professional athlete– climbing, adventure racing, whitewater rafting, cross-country skiing, and mountain biking–racking up world championships along the way. But while she might seem like just another superhuman playing out a fistful of aces, her empowering story proves that anyone can rise above self-doubt and find their true potential.

Rebecca’s three mantras for your optimal health and happiness are:

Mantra #1: things are only as hard as you make them
Mantra #2: notice the cycle of inspiration of others around you
Mantra #3: get off the couch and out!

Get your free gift (e-book), “5 Steps to Fit and Healthy”  from episode 043 guest Rocky Detwiler.

First turning heads with her rock climbing and paddling skills, Rusch soon found herself spearheading adventure racing teams like Mark Burnett’s Eco-Challenge series. As she fought her way through the jungles of Borneo, raced camels across Morocco, threaded the rugged Tian Shan mountains, and river-boarded the Grand Canyon in the dead of winter, she was forced to stare down her own demons. Through it all, Rusch continually redefined her limits, pushing deep into the pain cave and emerging ready for the next great challenge.

At age 38, Rusch faced a tough decision: retire or reinvent herself yet again. Determined to go for broke, she shifted her focus to endurance mountain bike racing and rode straight into the record books at a moment when most athletes walk away. Rusch to Glory is more than an epic story of adventure; it is a testament to the rewards of hard work, determination, and resilience on the long road to personal and professional triumph.

She is the founder and chief organizer for Rebecca’s Private Idaho.  A 50 or 100 mile ride over Trail Creek pass.

This ride is about about enjoying Idaho –but it’s also about something much bigger than that. Cycling is therapy for all of us in one way or another and Rebecca firmly believes that bikes make our world a better place.  Rebecca’s Private Idaho donates funds to the Idaho High School Cycling League, Wood River Bicycle Coalition, People for Bikes, and World Bicycle Relief.  These four organizations are all very different but all use the simple tool of a bicycle to change the world:  one ride, one person, one bike at a time.