E33: Develop a friendly relationship with food to not be HANGRY with Annie McMahon 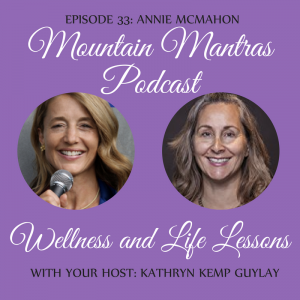 My guest for Episode 033 of the Mountain Mantras: Wellness and Life Lessons show is Annie Mahon, author of the book, Things I Did When I Was Hangry.

Today we talk about how to develop a friendly, healthy relationship with food. We talk with Annie, an expert on mindfulness and runs yoga retreats throughout the year.

Don’t miss this episode if you want to learn more about managing or avoiding eating disorders. 100% of the proceeds of Annie’s book will go towards programs to help people with eating disorders.

Annie grew up in Macomb County, a blue-collar suburb of Detroit, during the 60s and 70s.  Starting in junior high school, she spent her lunch money for “spiritual” pursuits purchased for $1 in the smoking area.  At the University of Michigan she continued her spiritual quest in sorority life, leading to excessive alcohol use, an eating disorder, and academic probation.  She interspersed poetry, journaling, and sleeping too much with reading about Buddhism and occasional attempts at meditation.

All of this somehow resulted in a graduating with a master’s degree in Computer Science, a move to DC, and a brief stint in the quintessential office place, IBM, before moving to an exciting but soul-killing position in sales at Oracle.  During her first months in DC, where she reverse commuted an hour from city to suburbs, Annie was stalked by a handsome stranger. He sat down with her at an outdoor café one morning and asked her what part of Michigan she was from.  It seems that this man had a second floor condo with bay window (and high-powered night scopes) across the street from her first floor efficiency apartment, and had been monitoring her comings and goings, including her family’s visit in a car with Michigan plates.  Obviously, she married him.

Working at a job which championed the Genghis Kahn motto “It’s not enough that I succeed, everyone else must fail” encouraged her to try motherhood, which seemed like a gentler place to live.   But giving birth to four children in three years left her with less time, way more belly, and even more questions about life and how to live it.  Meditation and reading books by Thich Nhat Hanh, Angeles Arrien, and Pema Chodron helped.   She took a side trip into Christianity and what-it’s-like-to-be-a-minority by attending Divinity School at Howard University, where she received her M.S. in Religious Studies, and discovered which direction her path was notleading.

In 1999 she accepted the Five Buddhist Precepts (aka the Five Mindfulness Trainings) from Zen Master Thich Nhat Hanh at a retreat in upstate NY.  The fifth training suggests letting go of using drugs and alcohol, which was a challenge, requiring Annie to more fully engage in life and her mindfulness practice to get through each intoxicant-free day with four kids, a husband and graduate school.

Being more awake in the world isn’t always easy. For the first couple of years after accepting the precepts, Annie struggled off and on with anxiety and depression, periodically falling back into old escapist habits.  This shifted quite suddenly on 9-11-01 when she got the message that life was too short to waste sitting on her ass, and that if she ever wanted to contribute to the world, now was the time.

On that day, she connected with peace activist Coleman McCarthy, and later that week began teaching mindfulness, conflict resolution, and peer mediation in nearby Washington, DC public schools.

Realizing that kids learn best by moving their bodies, and wanting to support their continued mind-body connection, she began teaching kids’ yoga in schools and local venues, eventually opening a children’s yoga studio, Budding Yogis, in her neighborhood.  That program expanded to become a full-scale adult and family yoga and mindfulness community studio, serving 900 students per week.  In 2011, with a nod to her anarchist daughter, she reorganized the studio into a workers’ cooperatively owned business, Circle Yoga Cooperative.

In 2009, she furthered her commitment to mindfulness practice and the mindfulness community by accepting the Fourteen Mindfulness Trainings, which continue to challenge and support her practice and make her part of the Tiep Heim Order of lay Buddhist practitioners, a community founded by Thich Nhat Hanh in Vietnam during the war.   Her most recent training was a two-year massage therapy program, grounding her mindfulness in the body senses and touch.  She became a Licensed Massage Therapist in 2011.

Annie has been writing all her life, starting with her Dear Ziggy journal in junior high school, editing the University of Michigan Greek Newspaper, writing for the U-M yearbook and founding and editing the Micro Digest, the U-M Computing Center’s first newsletter.  More recently, she has become known for her monthly essays on mindfulness, a self-published book of essays,Thoughts from Annie, and various articles on mindfulness and families.